Fourth of July is perhaps one of my most favorite holidays of the year. Sadly, this year we’ll be at a baseball tournament, but in years past we’re typically having a cookout or potluck or hanging out with family and friends. When we are celebrating Fourth of July, I love to find fun patriotic dessert ideas to bring that really wow our friends and show our patriotism. One of my favorite easy Fourth of July Dessert ideas is this Red White and Blue Oreo Trifle Dessert. This no bake dessert is super simple to make, feeds a large crowd, and is fun because you can tint the pudding in patriotic colors to celebrate America! Let’s check out how to make this super simple Fourth of July dessert recipe! 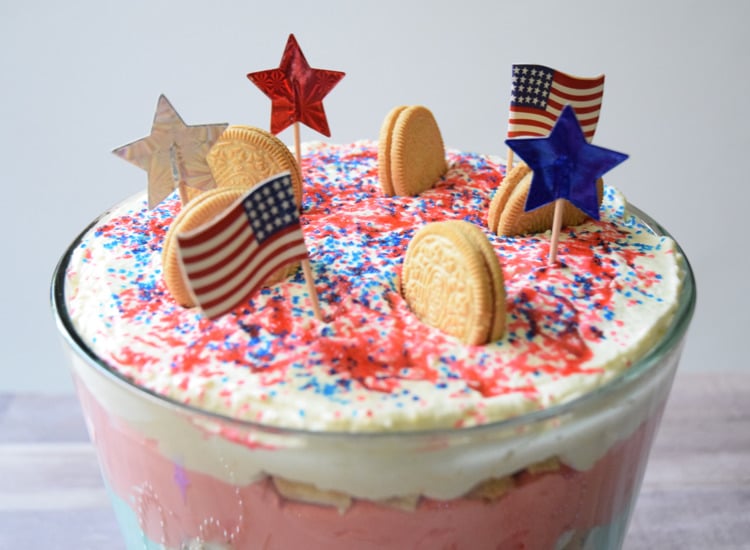 I’ve been sharing pudding trifle recipes on my site for years now. Some of my favorite pudding trifles include this delicious Birthday Cake Oreo Pudding Trifle and my Christmas Oreo Pudding trifle. The great thing about this recipe is that you can personalize it in any way you like–change up the flavor of pudding you use…use a different Oreo cookie flavor or one of their seasonal flavors…even get crazy and use two! You can have fun with this dessert and change it in any way you’ll enjoy or for whatever occasion you are serving it for! 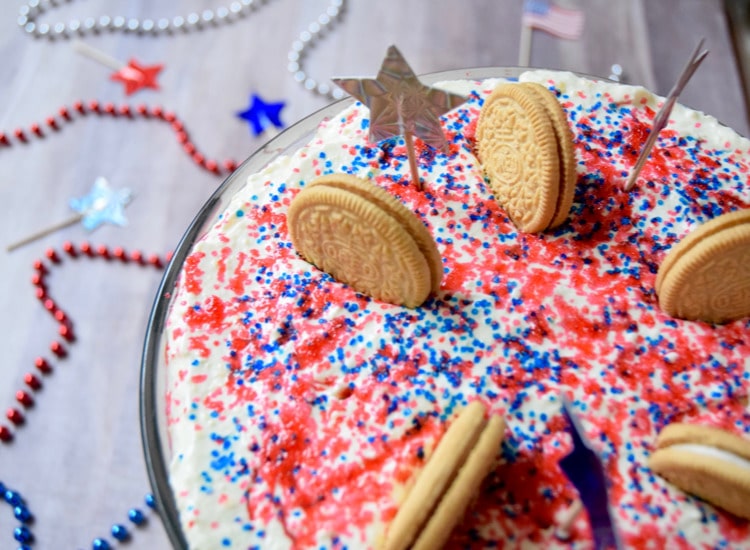 You can top this pudding dessert with sprinkles, birthday candles, cake decorations, tons of Oreos and more…you get to decorate this dessert in any way you like and trust me, you’ll have your friends and family wanting to get the recipe! 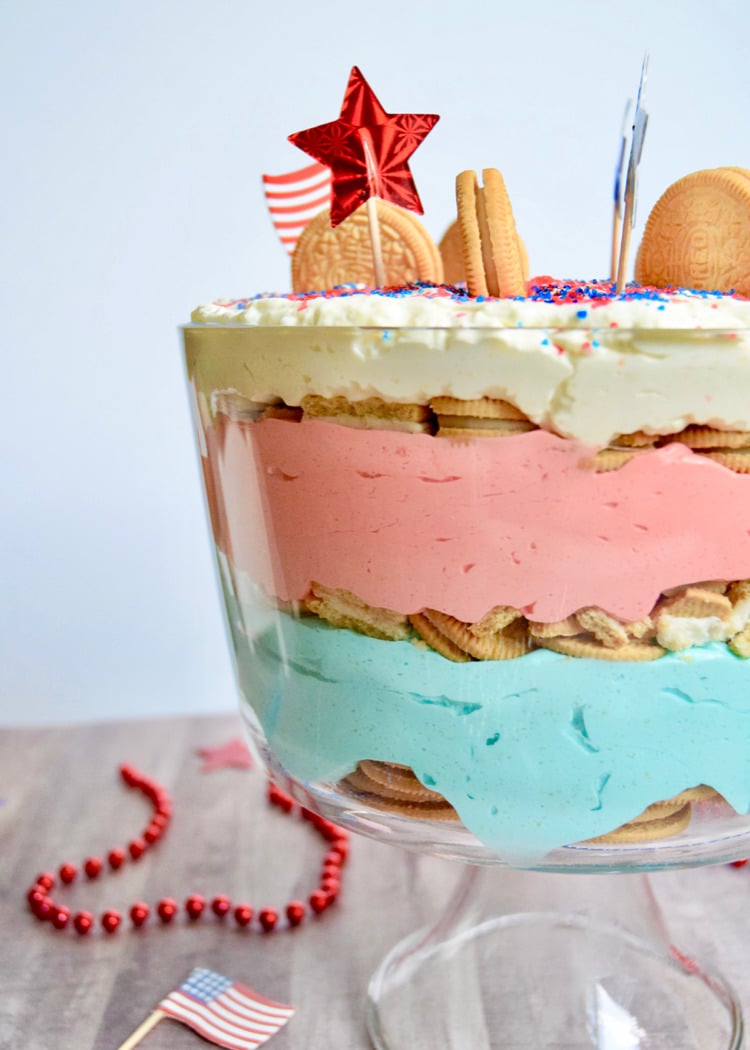 For this trifle recipe we used two large boxes of vanilla pudding and we made it in 2 batches and then separated the mixture into three bowls. We colored one blue, one red and left the third white. We then used gel food coloring, which is supposed to make better colors, but the red still turned out a bit pink, unfortunately. That’s ok!! You can go with light pastel colors for this trifle so that you don’t have to weigh down the pudding with heavy amounts of food coloring. For assembly, we layered Oreos at the bottom of the trifle dish, topped with blue pudding, then a layer or crushed Oreos, then the red pudding, more crushed Oreos and finally the white layer. We added a few more Oreos to the top, along with red + blue sprinkles and a few patriotic decorations. HERE ARE SOME FUN PATRIOTIC DESSERT DECORATIONS. 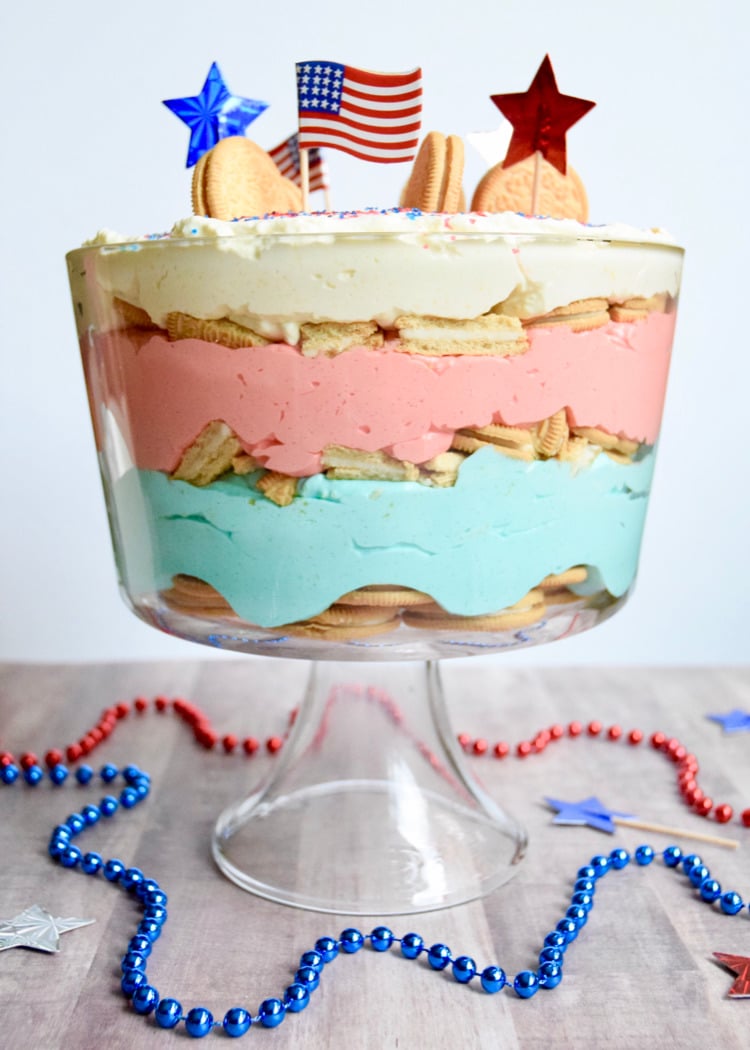 Another fun option is to top with patriotic sprinkles. HERE ARE SOME PATRIOTIC SPRINKLES you may love!

How far in advance can you make it and how long does it last?

One you’ve assembled your trifle, refrigerate it and then enjoy within about 48 hours. The cookies can tend to get soggy after a few days, so you don’t want to make it too far in advance.

Can you substitute the Cool Whip?

Yes, if you’re not a Cool Whip fan you can use Homemade Whipped Cream instead and mix it into the pudding.

Can I use different types of pudding?

Will this work with fat free cream cheese?

I’d say that it probably would work, although I prefer the full fat version. This is a dessert after all!

How many people will this feed?

My guess is that it will feed a dozen or more depending on serving size. It’s a very rich so a little goes a long way. 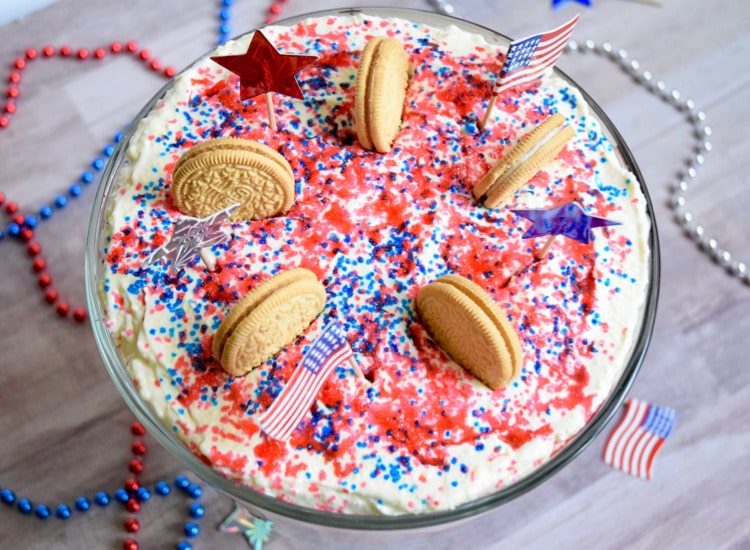 Helpful supplies for making this trifle…

The Best Oreo Trifle Recipe for Fourth of July 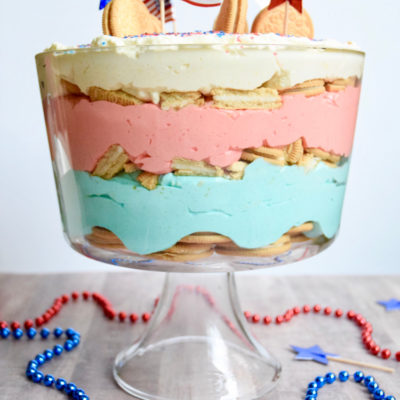 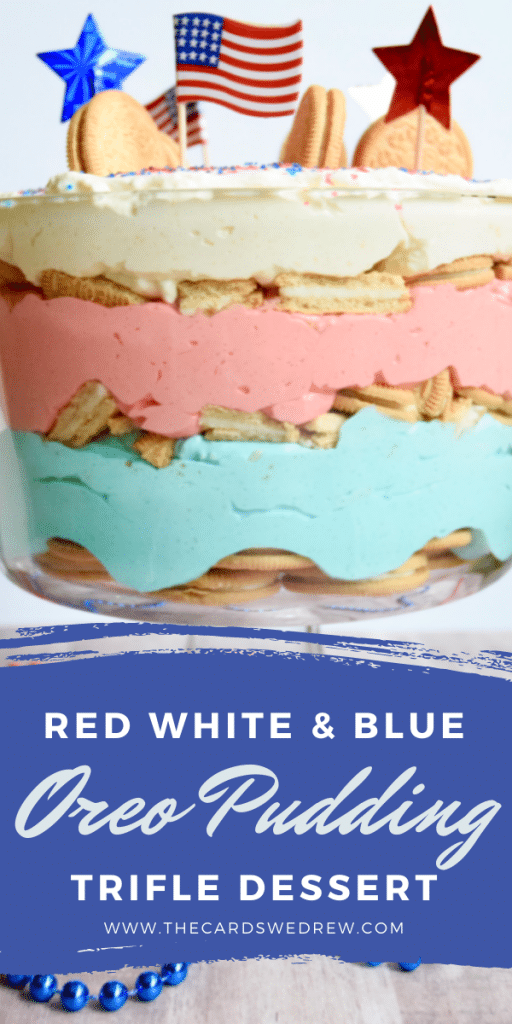