When my husband and I moved into our house nearly 4 years ago, we knew that one of the biggest things that we’d have to tackle and tackle FAST was our Master Bathroom makeover. Our master bathroom is tiny you guys, like…closet tiny, but we were ok with that knowing that we had the chance to make it our own. In August 2017 we finally gutted the bathroom, pulled out the horrible bathtub and shower, and ripped the disgusting vanity and toilet from the space so that it was a complete blank slate. Over the course of the next 18 months, we worked on and off to finish the bathroom as time and money permitted and FINALLY I can show you the hard work we did to make it into a completely different room!! 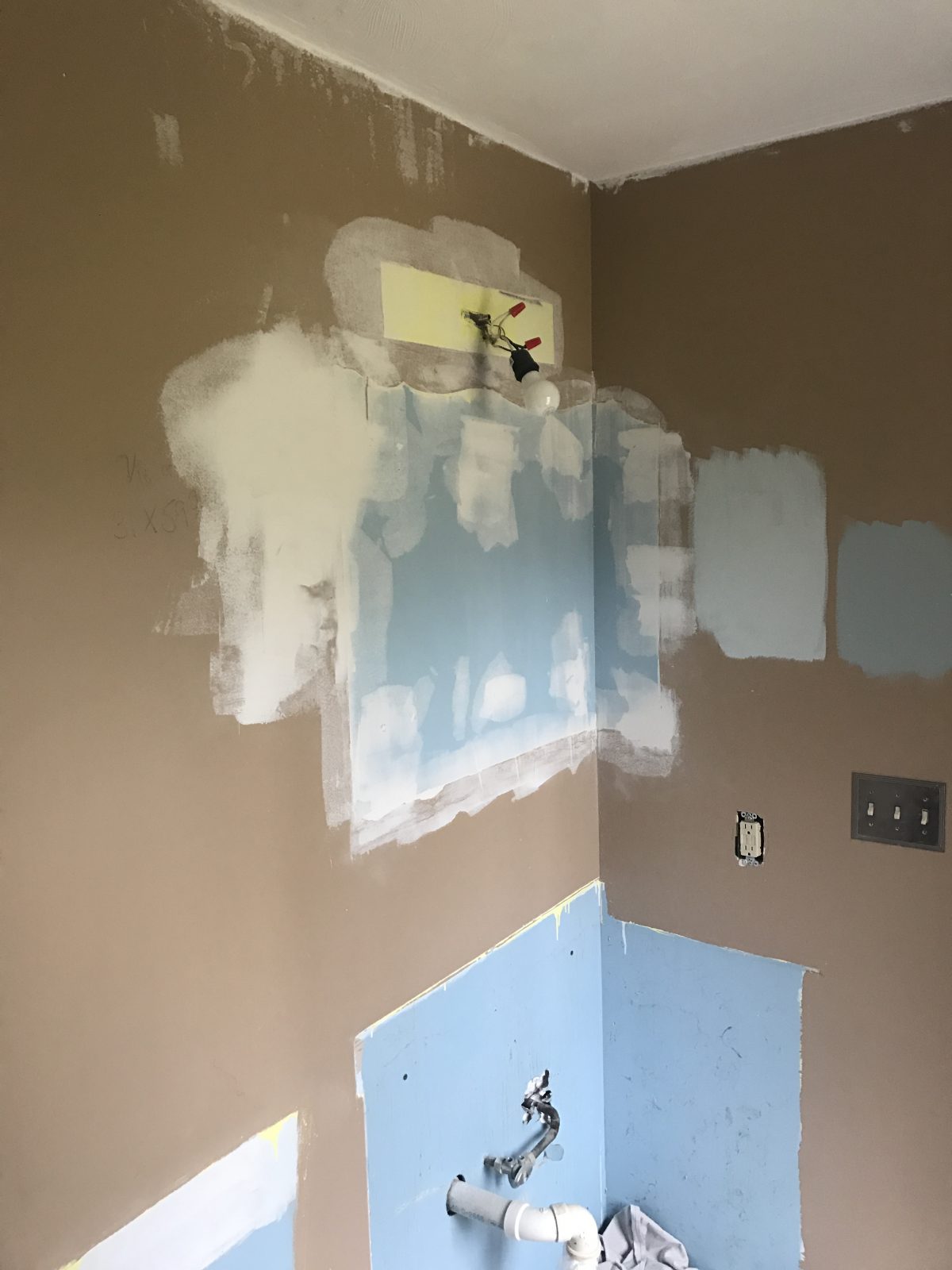 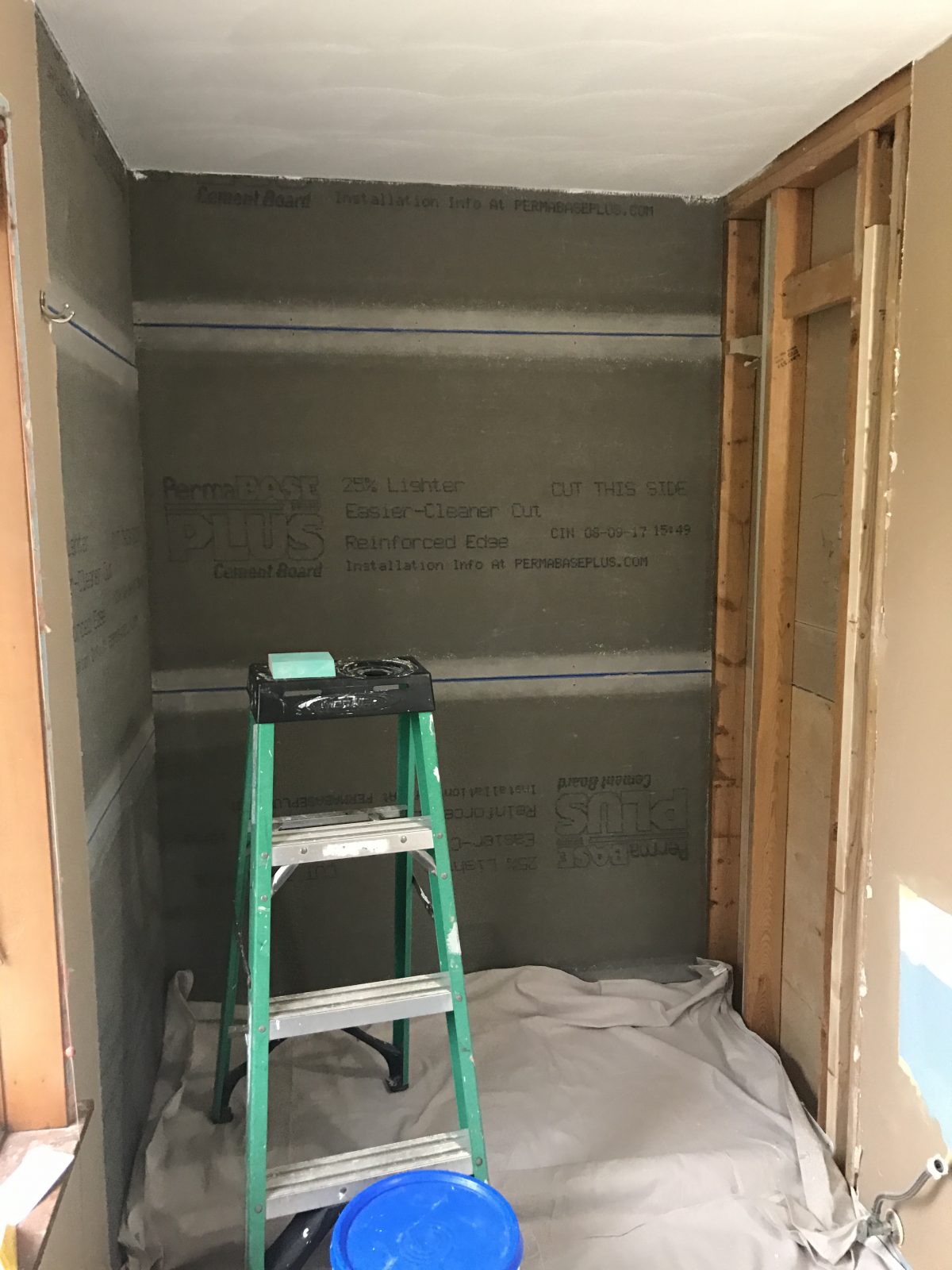 I looked and I looked and looked for the before photos and I think I lost them since it’s been so long. So let me paint the picture…mustard yellow linoleum, white vanity with CAKED on paint and ugly tan countertops. A toilet that would never be clean enough despite how many times it was bleached and a shower/tub basin that had seen better days. We ripped the whole thing out and started fresh.

We started by adding new tile to the floors. I chose a pretty marble hexagon tile with hints of blues and grays and whites in it. After that we selected a Navy Blue vanity with white matte finished quartz countertops…I love that they are matte because it hides water drops better than my shiny granite counters in my kitchen and other bathroom.

Once we got the new floor tile and vanity installed, next up we got started on the shower. Being that we have a tiny bathroom, I just wanted simple, bright, white, and airy. I’d love the crazy patterned tile or to do something bold, but I know that for us…there’s a good chance we’ll sell this home in a few years, so I wanted the bathroom to be timeless and the design to be non-discriminating even for the pickiest buyer. So nothing too crazy or wild with the design! 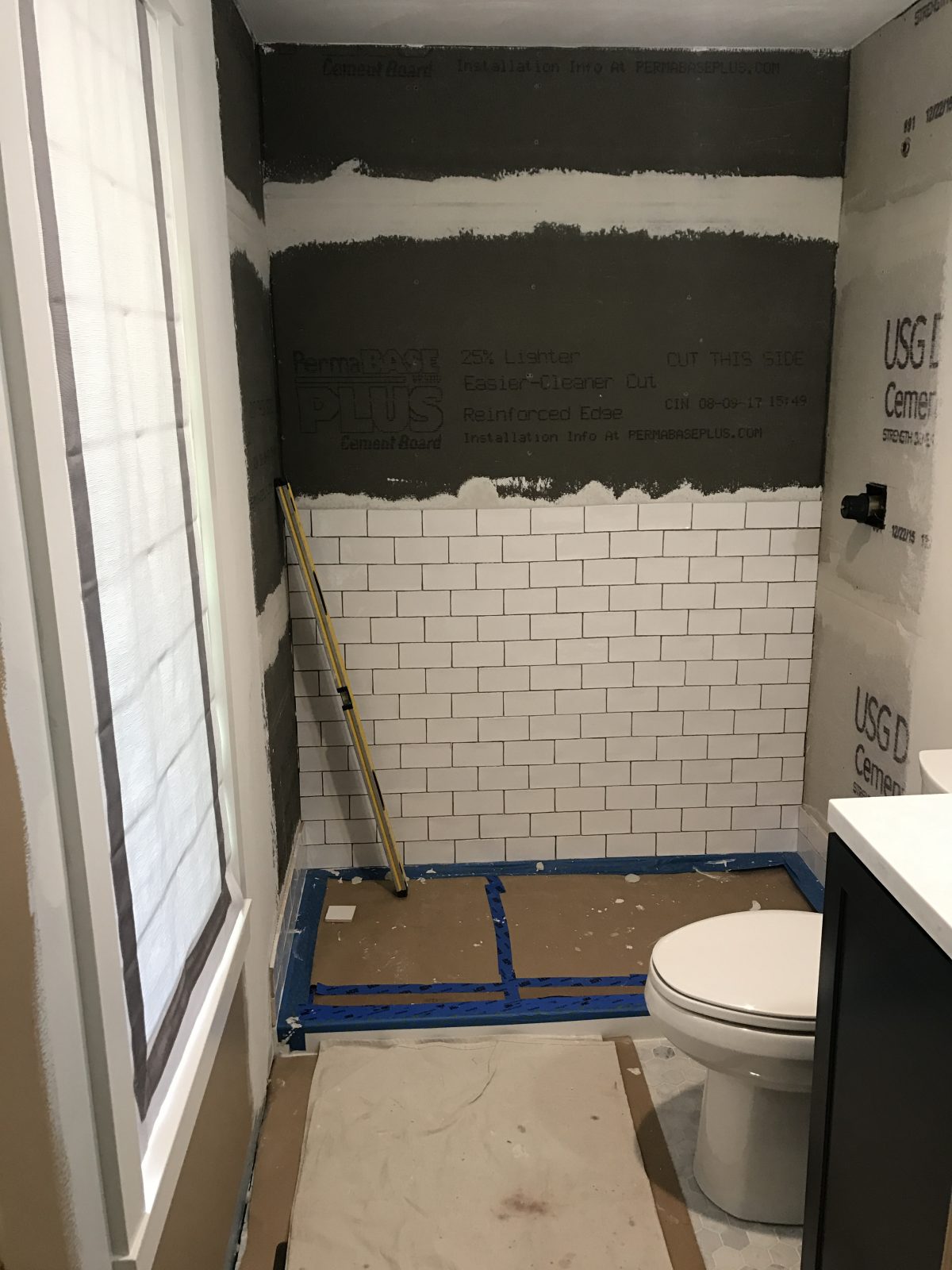 We opted for a white subway tile from Wayfair with a white grout. The tile is a little uneven, so it adds character. Half way up we added a navy blue glass tile for a pop of color–I wanted something to coincide with the navy blue vanity, but an all glass tile shower wasn’t in the budget (so expensive!).

During this time, we also re-trimmed out the window, added a new custom roman shade, and installed a new toilet–because we weren’t about to keep that old one!! 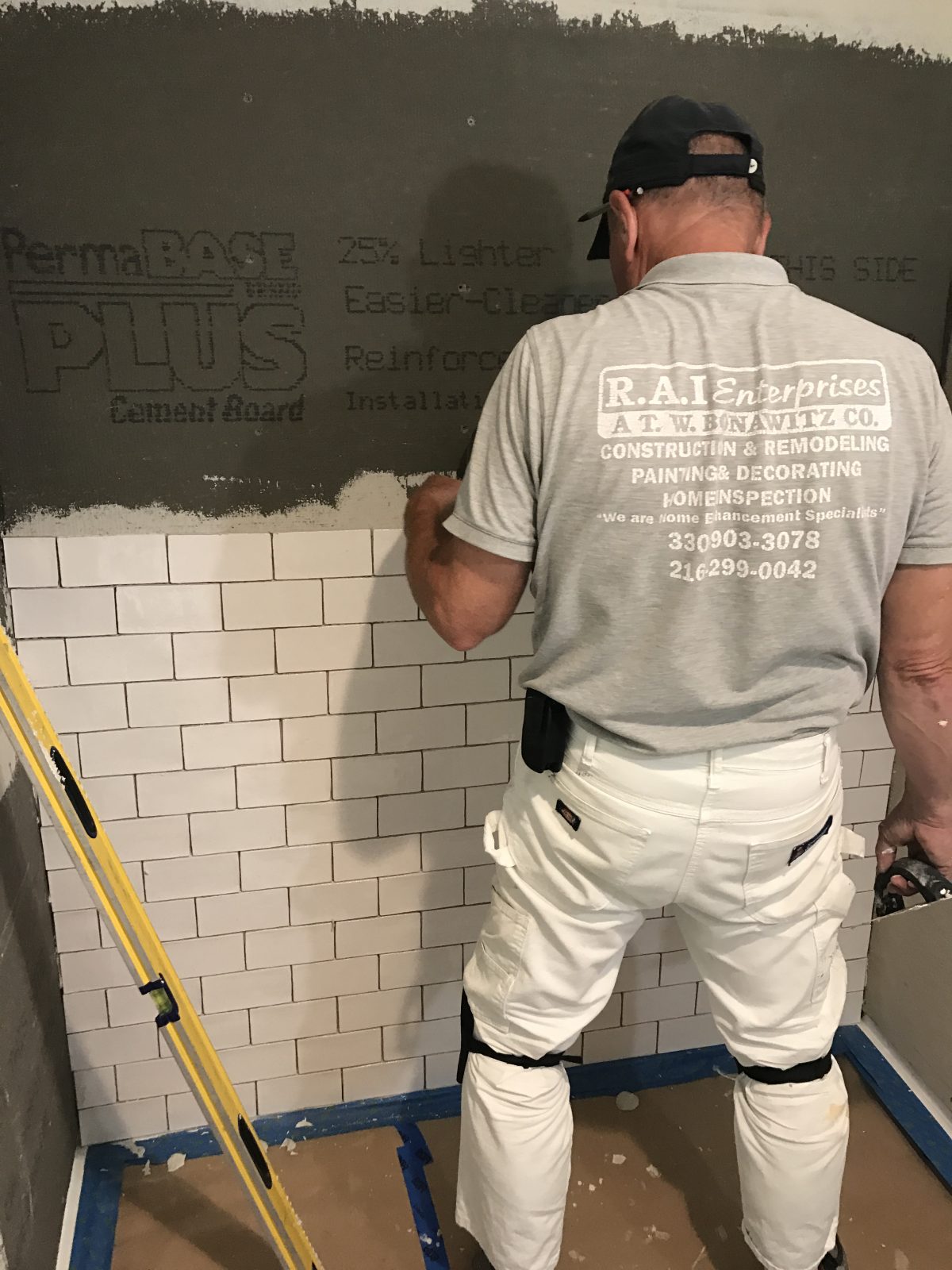 Side note, my dad is a contractor in the northeast Ohio area, so he did an amazing job doing most of the hard work that was above our pay grade! 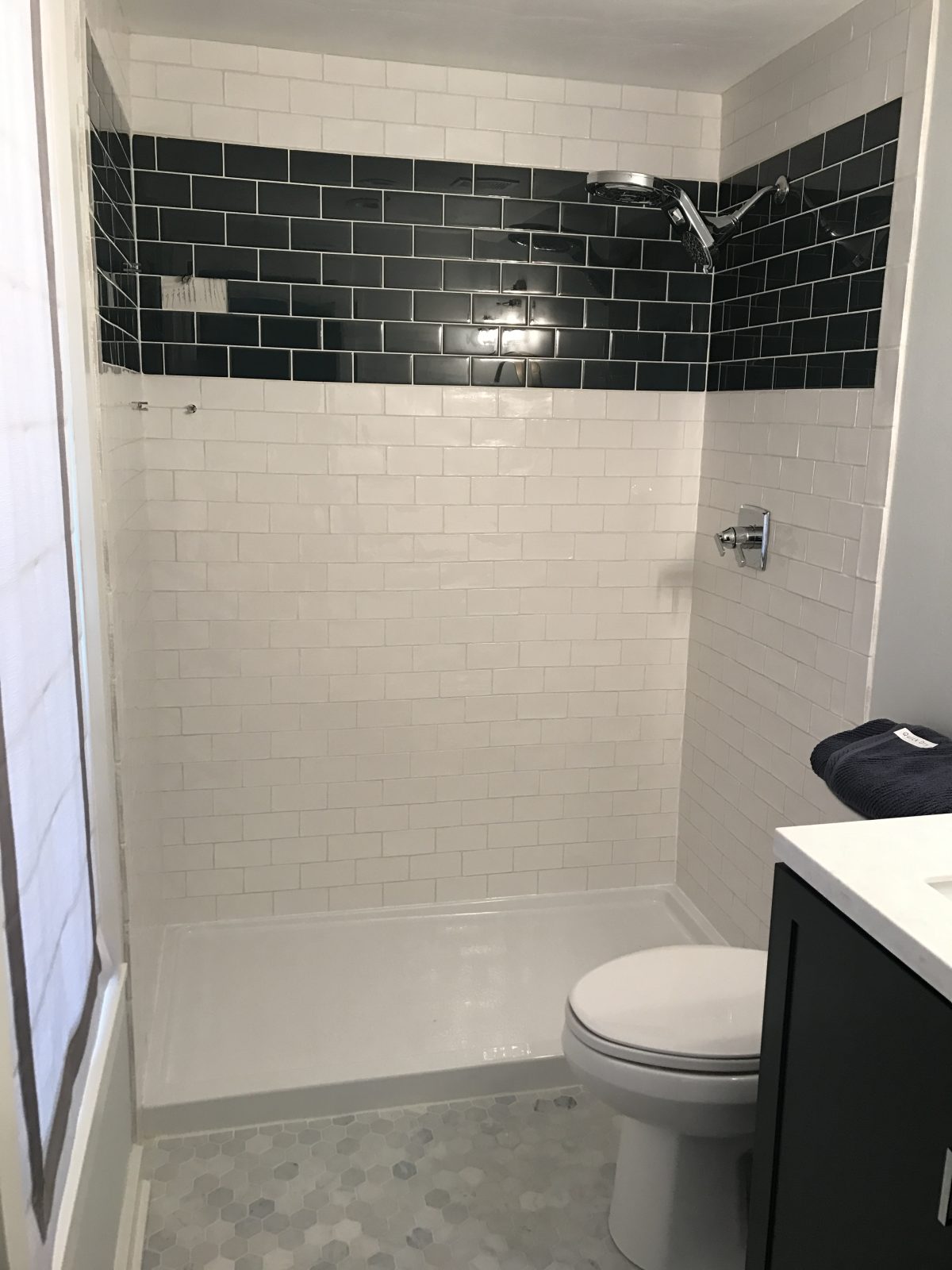 After the shower was installed, I partnered with DreamLine Shower to pick out the perfect shower door for our space. DreamLine has a TON of beautiful options for bathroom shower doors, but because my space was so small, we had to be very specific with what we selected–so there were less choices. If you think about it, we couldn’t get a door that opened up into the room because it was too small, so it had to be rolling. Additionally, we couldn’t have a shower door that only rolled on one side, it had to roll on both otherwise we’d have to step INTO the shower to turn it on (and get wet). So we really had a specific type we had to stick with and DreamLine had several in several different finishes to help us out.

Even better, DreamLine worked with me on the phone and through email with photos and measurements to best select the door so that when it arrived, it was a good fit. They were AMAZING to work with!! 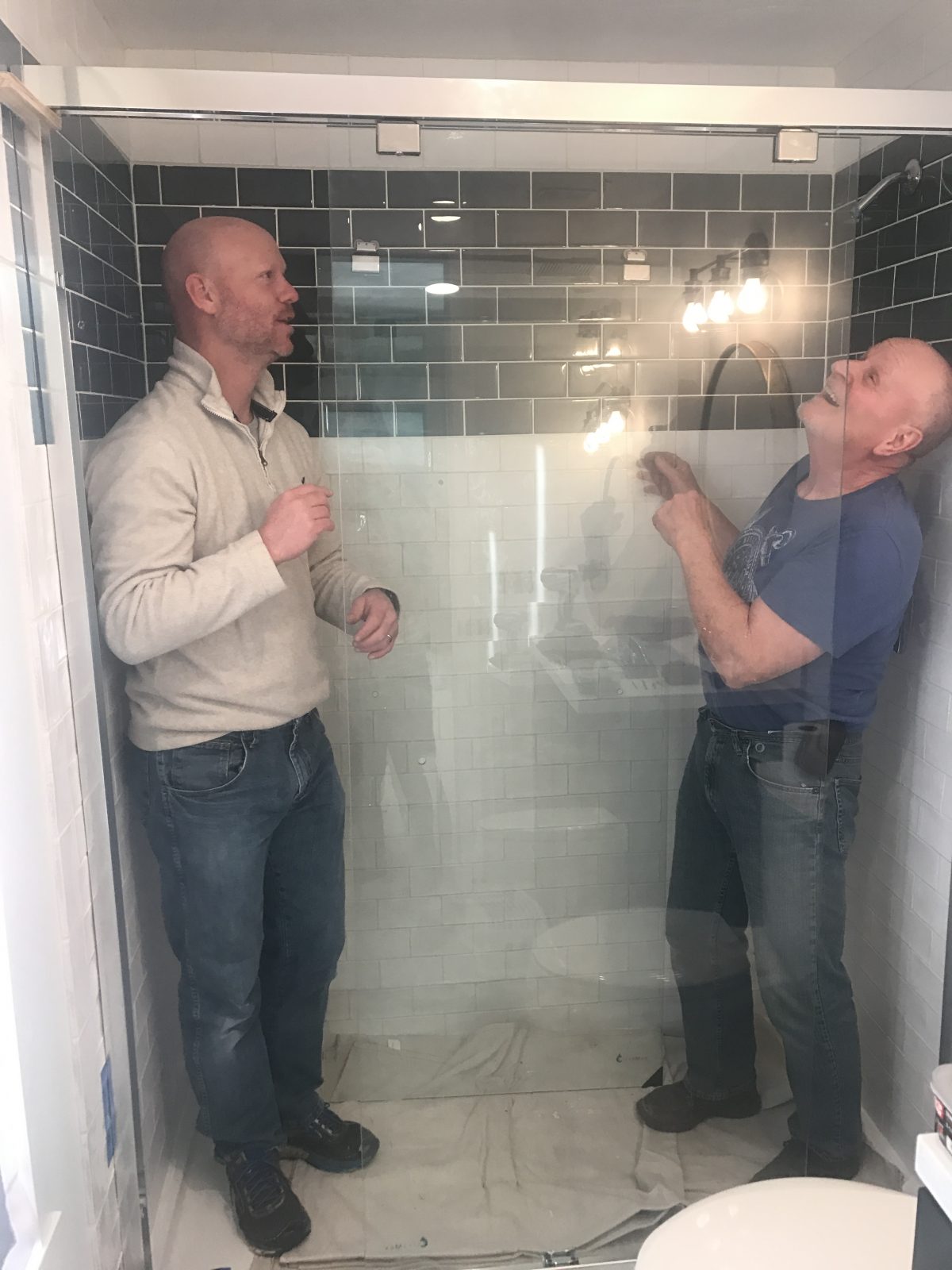 My dad and my husband spent about a half day installing the DreamLine Encore Shower door and we just love how it finished off the whole space! It allows us to the see the gorgeous tile my dad installed for us and it prevents the bathroom from seeming too closed off.

Now let’s check out some of those afters…. 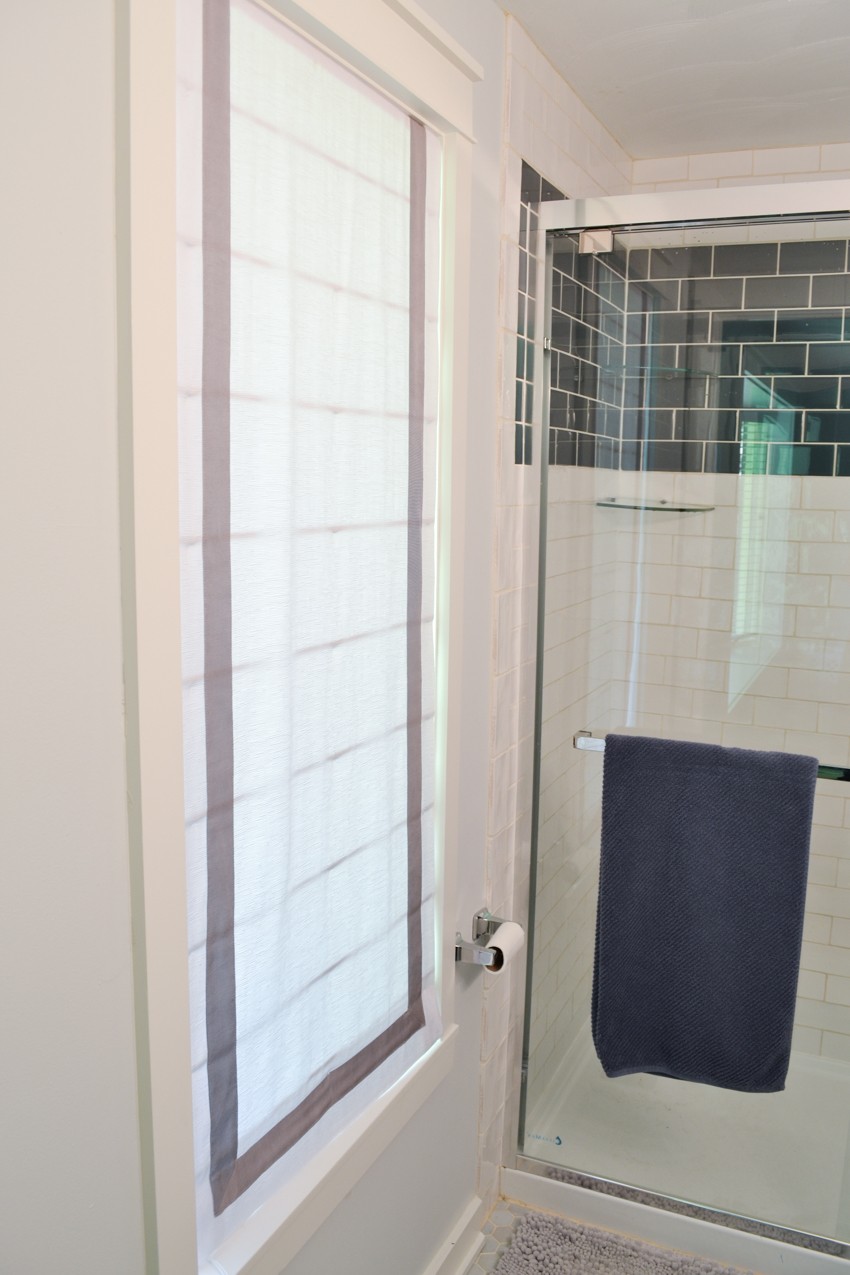 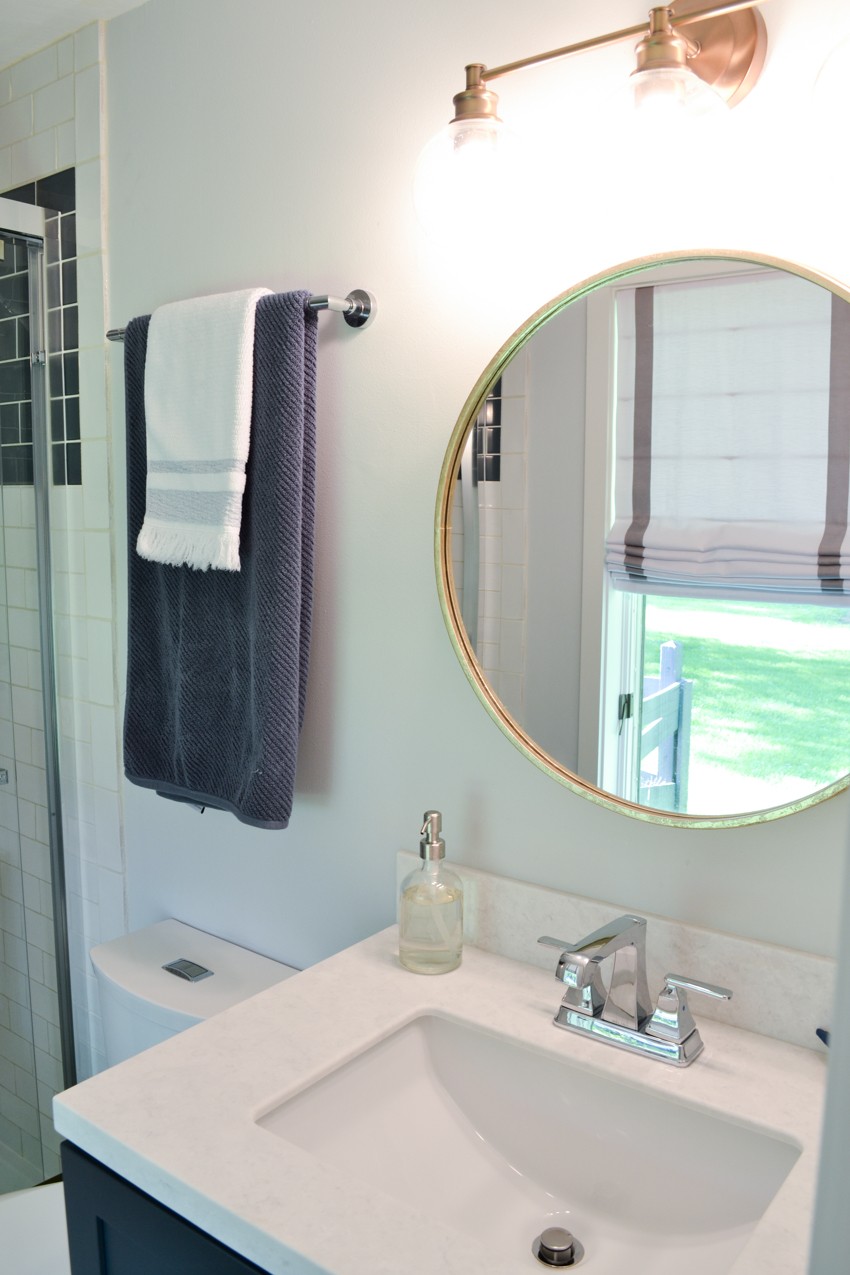 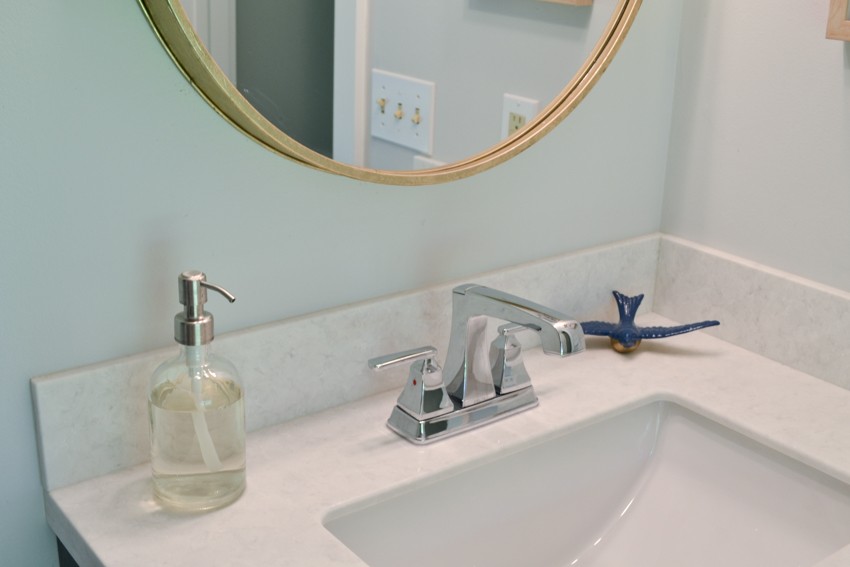 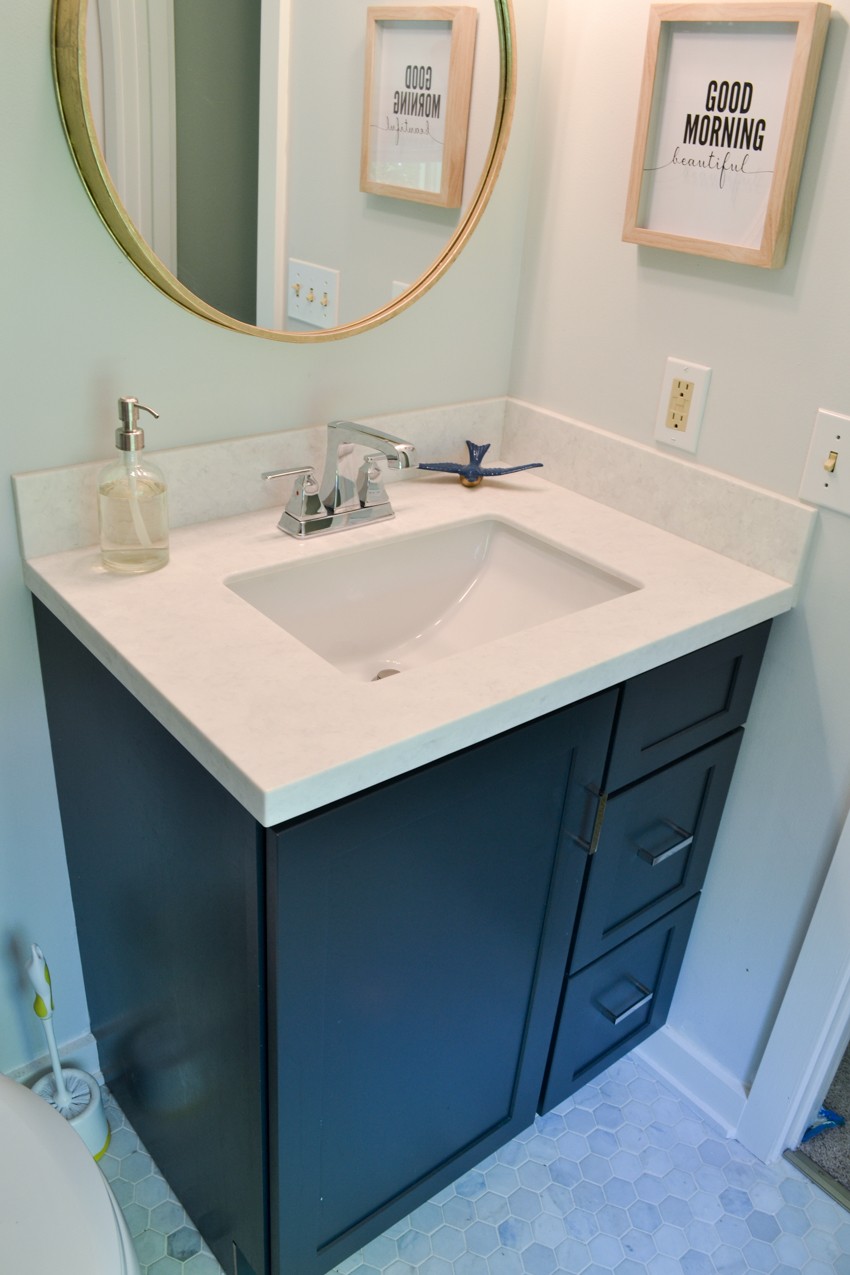 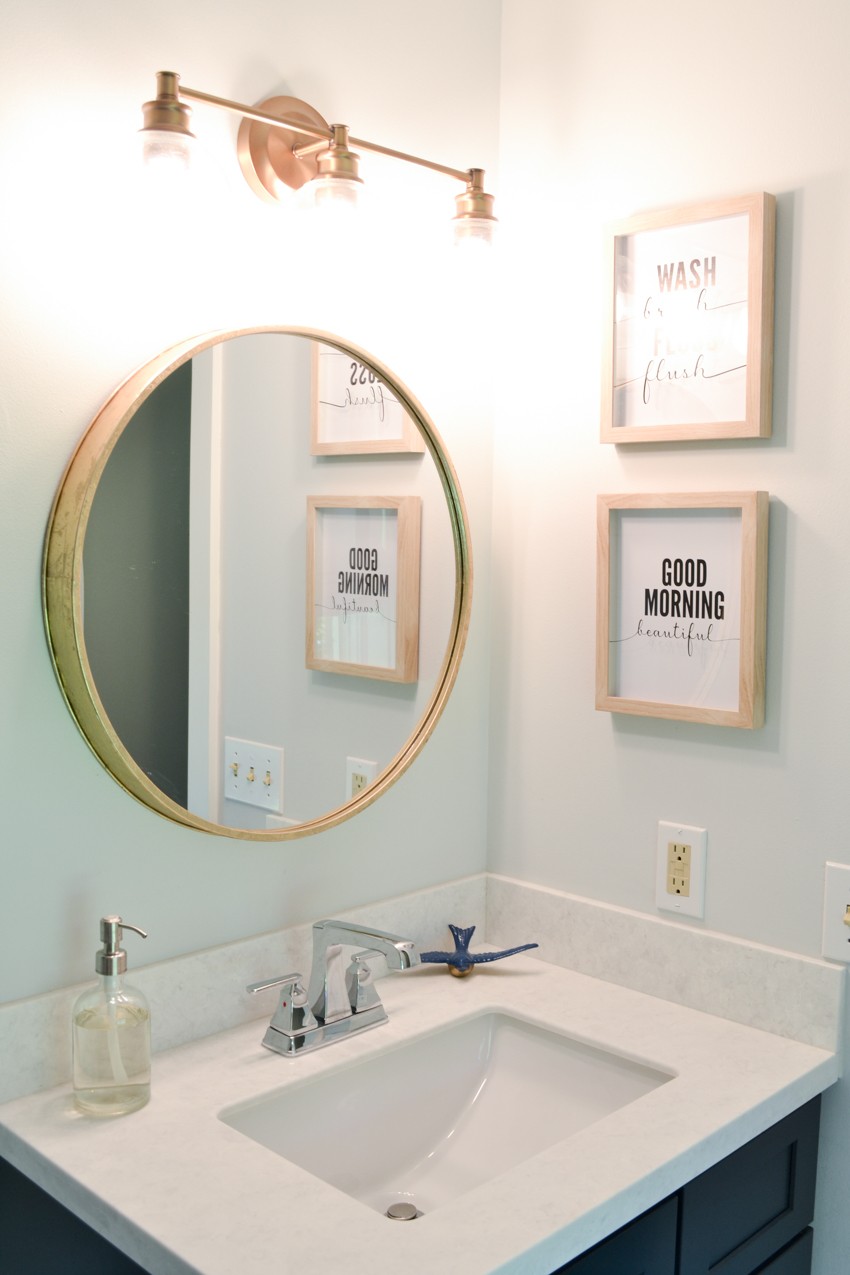 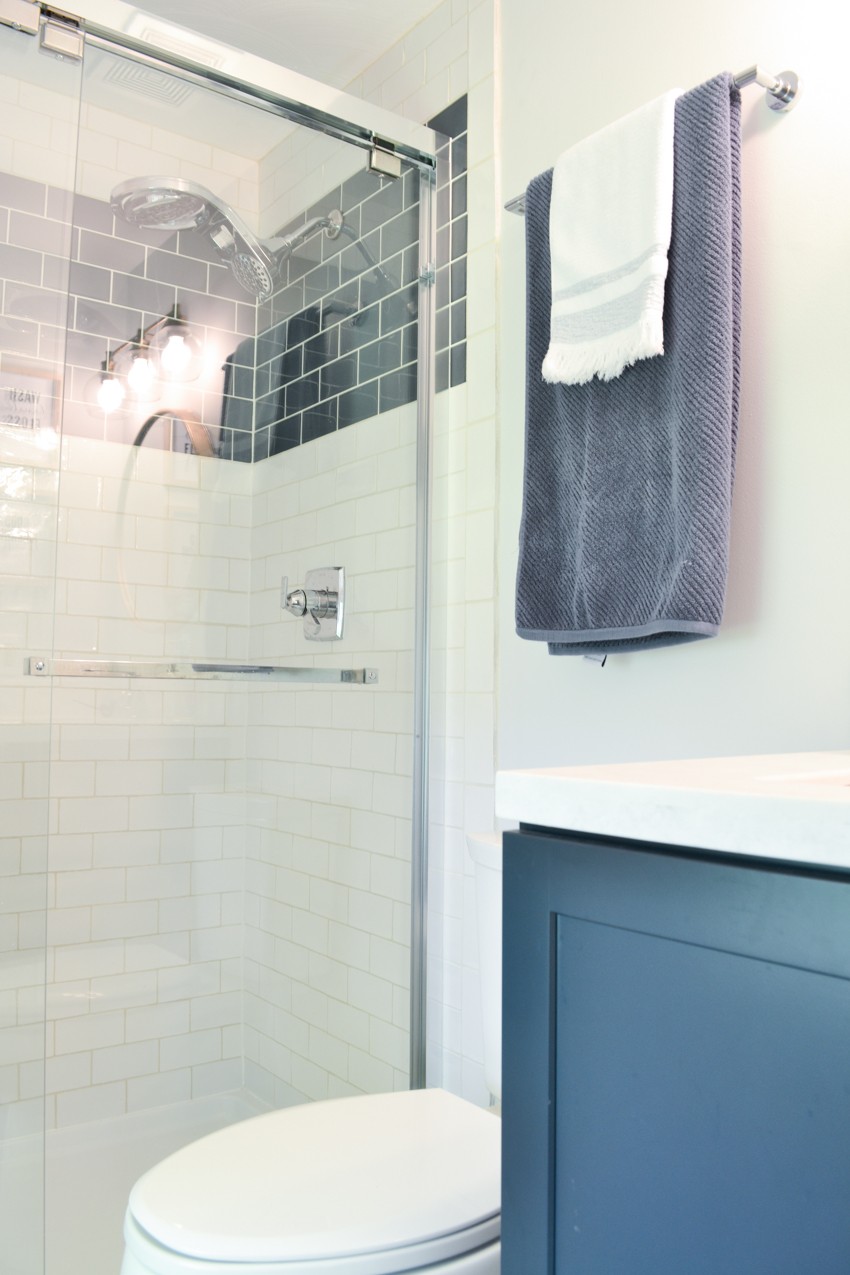 What a difference right?! From a dark tan, 1980’s bathroom to a bright, airy master bathroom that definitely opens the space up more and hopefully has a timeless look to the whole space so that years from now when we try to sell, we at least have a NICE small, tiny master bathroom! 🙂

Definitely never underestimate the power of taking your time to do something right, picking out the right design for your home and taste, and deciding that it’s ok to be more traditional with your design too!!

Special thanks to DreamLine for providing us with the Encore Shower door for this post. Find DreamLine Shower doors, tub doors, shower enclosures and more HERE.